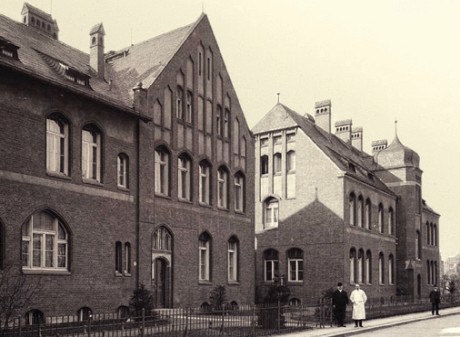 History of the Pediatric Clinic

The Pediatric Clinic was one of the first buildings to be erected between 1897 and 1916 in the context of the Charité's major reconstruction scheme. This functional new building inaugurated in 1903 is where cutting-edge bacteriology and hygiene-related activities were carried out; the building's novel architecture also contributed to these successes. The towering Lecture Hall Building stood in the middle of the tripartite ensemble (A), the Polyclinic building (B) extended to the south, the North Wing (C), and the wards were located along the Charitéstrasse with a gangway to the quarantine barracks.

It was here that Otto Heubner (1843–1926) who was appointed Germany's first ever full professor of pediatrics in 1894 and was also actively involved in designing the new clinic, concretely implemented his concepts of modern pediatrics in research, teaching and medical care.

Heubners successor, Professor Adalbert Czerny (1863–1941), assumed his position as head of the Pediatric Clinic in 1910. He was instrumental in helping Berlin to gain top international recognition in the field of pediatrics during the first third of the twentieth century. Georg Bessau (1884–1944) took over the clinic in 1932. He actively integrated Berlin pediatrics into National Socialistic health care policies and was responsible for carrying out excruciating tuberculosis vaccination experiments on handicapped children who often died after long periods of suffering.

The building was badly damaged during World War II and was unusable except for a few rooms in the Polyclinic. The reconstruction started in 1945 was carried out under extremely difficult conditions and was not completed until the early 1950s.

In years to follow, the Pediatric Clinic again began to attract broad recognition under its various directors Wilhelm Stoeltzner (1872–1954) until 1947, followed by Karl Klinke (1897–1972), starting in 1953 Friedrich H. Dost (1910–1985), who received international accolades for his ground-breaking work in pharmacokinetics, Josef Dieckhoff (1907–1977) from 1960 to 1972, followed by Peter Grossmann (born 1926) until 1991, and Ernst Ludwig Grauel (1935–2005) was director until 1994, under whose aegis advances were made in the areas of metabolic diseases, pediatric cardiology, child nephrology, including a dialysis center and neonatology, as well as outpatient care.

With Gerhard Gaedicke (born 1944) at the helm, the pediatrics department moved to Charité's Virchow Clinic Campus in 1996. On the occasion of its 100th anniversary in 2003, the Charité's Faculty Council renamed the building "Eduard Henoch House". Today, the former pediatric clinic building has been integrated into a new teaching and research center of the Faculty of Medicine "CharitéCrossOver", where it is also home to a learning center for students.

The Otto Heubner monument – a portrait bust fashioned in 1913 by the Berlin sculptor Hugo Lederer (1871 – 1940) – stood in front of the building until 1938. The piece was stored during the War and was returned to its rightful place in 1951 in time to commemorate Huebner's death 25 years earlier. After again being stored due to construction work, the monument was again made available to the public in 2013, thanks to the efforts of the Department of General Pediatrics and the association "Friends and Supporters of  Charité Berlin e. V.".