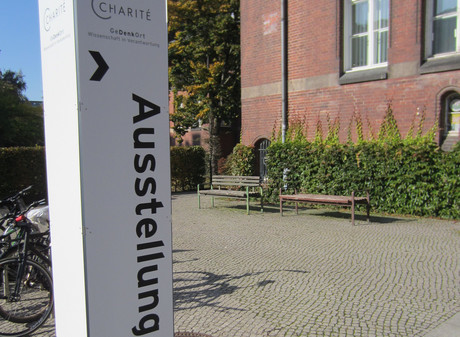 Charité was and continues to be a driving force behind the development of the fields of psychiatry and neurology and has brought forth eminent physicians during its 200-year history. Important names here include Wilhelm Griesinger (1817–1868), Carl Westphal (1833–1890), Karl Bonhoeffer (1868-1948) and Karl Leonhard (1904–1988). It is also important to note, however, that prominent hospital personalities were also actively involved in medical crimes during the National Socialist period.

It was against this historical background ─ which time and again has led to controversy in terms of how to best approach the history of the hospital, its employees and patients ─ that the lecture hall and foyer of the present-day Department of Psychiatry and Psychotherapy / Neurology was purposefully re-designed in 2008. This was preceded by intensive discussions by the international advisory board of the "Society on the History of Psychiatry at Charité Berlin e.V.", whose stated goal is to appropriately elucidate the history of psychiatry at the Charité, in particular during the Nazi period.

In April of 2008, a work by Dorothea Buck, herself an artist who suffered forced sterilization during the National Socialist period, was officially inaugurated on the occasion of a small ceremony. The chair holder's gallery previously located in the foyer has changed its venue in the context of the reconfiguration and the portraits now hang in the main auditorium. Text panels informed students and visitors with regard to the debate surrounding the history of psychiatry and the crimes of the National Socialist era. In the course of reproducing the portrait, in accordance with a resolution by the advisory board and all academic chair holders, the gallery was expanded to include the National Socialism period, which heretofore had not been the case.

A few years later, the gallery of hospital directors was replaced by portraits of physicians, who after 1933 were dismissed and persecuted for political or racial reasons.

By openly displaying such portraits in the "Auditorium Gallery", the Departments of Psychiatry and Psychotherapy / Neurology are purposefully documenting the individual biographies of persecuted staff members, and ─ in a further step of the next planned reconfiguration ─ a number of victimized patients will also be honored. The departments are aiming to promote "Responsible Science" by improving intramural awareness of the provided historical information as a component of an indispensable remembrance and conciliation scheme, thereby also influencing current practices in psychiatry and neurology, in addition to public opinion.