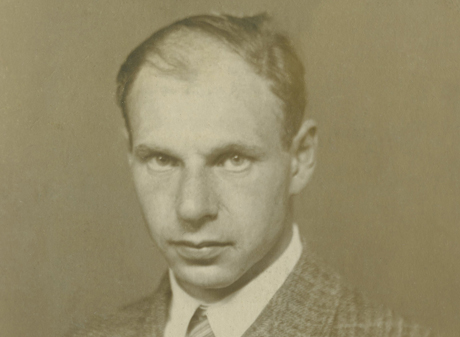 Our following short biography is based on the archives of the family and of Humboldt University Berlin and recollections of his daughter, a lawyer in Boston, Massachusetts. Of the many family stories he told her in her childhood, she recalled three from his life in Berlin. Her most indelible impression was his description of his long hours at Charité Hospital, with short meals in the nearest restaurant, where the waiter he befriended brought him another diner’s order so that he could eat quickly and return to work. He described to her a social life that included the privilege of attending the opening of The Blue Angel and the party following the film, at which Marlene Dietrich sang, reclining on the piano. He told her stories about his bohemian life in Berlin - his friendships with artist Heinrich Kleiser, playwright Berthold Brecht, and composer Kurt Weill.

Strauss represented in his family the third generation of physicians. His father, Dr. Arthur Al-exander Strauss, was a dermatologist in Barmen and the first cousin of the poet-playwright Else Lasker-Schüler. His mother, born Lucy Hertz, was a cousin of the physicist Heinrich Hertz. His parents were active members of the Lutheran Church Barmen (from 1929 Wuppertal-Barmen), enthusiasts of the arts, and art collectors, inter alia, of German Expressionist paintings and classical and medieval sculpture.

Arnold Strauss studied medicine in Freiburg, Basel, and Bonn (state examination in 1927). He did his thesis on Post Hemorrhagic Tumescence of the Spleen with the pathologist Prof. Dr. R. Rössle in Basel and became his assistant there in 1928. When Rössle was appointed the head of the Pathology Department in Berlin, Strauss joined him there. With the consent of Rössle he studied at the Internal Clinic of Hamburg and in the Department of Chemistry and Bacteriology. Rössle voted for him to become senior resident from April 1, 1933, which was refused by the Prussian Ministry of Science, and he was dismissed - initially without Rössle’s consent - in accordance with § 3 of the law of April 7, 1933, which ordered the dismissal of all persons of “non-aryan” origin, independent of their religious affiliation. Rössle had shown him the new text books approved by the national socialist government and advised him that he would have to leave Germany.

Because of the impossibility of finding a job in Germany, Strauss worked as a pathologist in The Hague in August 1933 and in Florence in spring of 1934, positions for which Rössle had recommended him. In April 1935 he was invited to come to Milan, but in August 1935 he left Europe for a position in the United States, as the only pathologist in a small hospital in Montgomery, West Virginia. Within a year he had learned English and moved to the expanding DePaul Hospital in Norfolk, Virginia, where he was chief pathologist for 29 years. He and his colleague, Robert J. Faulconer, also established a private practice, for which they opened a laboratory.  Strauss was also Associate Professor of Pathology at Medical College of Virginia, consultant to the Chief Medical Examiner of Virginia and numerous military hospitals, and the author of nineteen articles in medical journals.

From 1933 to 1940, Strauss considered himself engaged to marry the novelist Irmgard Keun (1905-1982), who in 1936 left Germany, where her books were banned. Selections of Keun’s 271 letters to him have been published: Irmgard Keun, Ich lebe in einem Wirbel, edited by Gabriele Kreis und Marjory S. Strauss. Claassen Verlag, Düsseldorf 1988. He sought to obtain emigration visas for her and for his parents from 1938 until 1940, when she returned to Ger-many under false papers and  his parents ended their lives in The Hague.

In 1941 Arnold married Marjory Spindle (1916-1994), a pianist and art-historian. He support-ed her efforts as a civil rights activist and testified before the Virginia legislature in favor of revocation of a law that required the segregation by the donor’s race of blood stored for transfusions.

Strauss was keenly interested in the fine arts. While still a student, he began a collection of Daumier prints, and he lectured at Norfolk Museum of Arts and Sciences (now The Chrysler Museum) on his collection. An accomplished chamber music group rehearsed in the Strauss home. Every summer for the last twelve years of his life he visited Peru, where Kleiser had emigrated in 1933, during which Strauss assembled one of the most varied collections of Peruvian Pre-Columbian art in the U.S. After his wife’s death in 1994, The Chrysler Museum received gifts of paintings by Paula Modersohn-Becker and Christian Rohlfs from his parents’ collection.