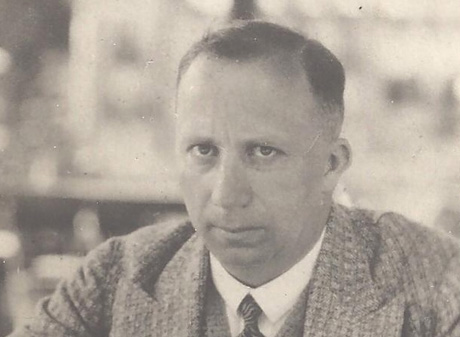 Ernst Mislowitzer (born in Schneidemühl/Piła, 1895 – died 1985 in New Haven) completed degrees in medicine and chemistry. Having initially worked at the Institute of Pathology's Chemistry department under Ernst Salkowski during 1920/21, he went on to work with Peter Rona, a biochemist who took over the running of the Institute in 1922. Following the publication of his habilitation thesis Über Autolyse - Physiologische und pathologisch-chemische Untersuchungen [About Autolysis – Physiological and Pathochemical Investigations], Mislowitzer was formally awarded his university teaching license for Physiology and Chemical Pathology in 1926. In 1929, he moved to II. Medizinische Universitätsklinik, where he became the Head of the Laboratory (which included oversight of the research laboratories), and worked with Gustav von Bergmann. He was appointed Professor Extraordinarius in 1931. His main areas of research interest were based in the field of clinical biochemistry, and included hydrogen ion concentration measurements of bodily fluids, and the development of a potentiometer with a new type of electrode to measure pH values, for which he obtained two patents. He also conducted research into the characteristics of enzymes and protein fermentation.

In March 1933, Mislowitzer realized he faced imminent dismissal as a result of his Jewish heritage and, in May 1933, he moved to France to try and find a new job. In the autumn of the same year, he emigrated to Yugoslavia, accompanied by his wife, 5-year old daughter, and 2-year old son. On 1st October 1933, both he and Ferdinand Blumenthal (see GeDenkOrt) became guest professors at Belgrade University. While at Belgrade, he lectured on biochemistry and cancer, worked in an outpatient department for cancer patients, and was involved in the planning of a Belgrade-based Institute of Cancer Research. On 9th April 1935, and in accordance with section 18 of the Reich's habilitation regulations, the Nazi authorities withdrew his university teaching license. In 1938, Mislowitzer and his family emigrated to the United States, where he adopted the name Ernest Mylon. Thanks to the support of Milton C. Winternitz, he was able to settle in New Haven, where he found a position at Yale University's Department of Pathology. He later moved to the Lawrence and Memorial Hospital in New London, Connecticut, where he remained as Head Pathologist until 1963. He continued to publish his work in clinical chemistry between 1945 and 1960. His research publications, which appeared in renowned American journals, included fluorometric studies of plasma epinephrine levels, and research into the detection of renin.