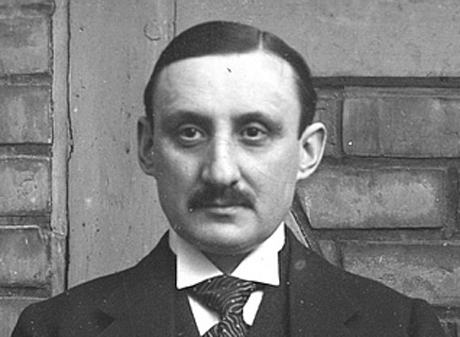 Following the completion of his medical studies and doctoral degree, Ferdinand Blumenthal (born in Berlin, 1870 – died 1941, west of Navas, Estonia) began his internship at the then I. Medizinischen Universitätsklinik Berlin. In addition to his training as an internist, he was conducting research in physiological chemistry. Blumenthal completed his habilitation at Berlin's Friedrich-Wilhelms Universtät in November 1899, and was awarded an Associate Professorship in 1905.
As a result of encouragement from Ernst von Leyden, he became involved in the early planning and development stages of a new 'Department of Cancer Research' (from 1907 onwards, this was known as the 'Institute of Cancer Research'). When Germany's first cancer research and treatment center was founded in 1903, it soon became the central focus of Blumenthal's professional endeavors. Aside from his interest in the development and metabolism of cancer cells, he also pursued research into the treatment of cancer. It was thanks to his very active involvement and a high degree of personal commitment that the Institute managed to survive through the First World War and the interwar years. Blumenthal became a co-director of the Institute (alongside pathologist Johannes Orth) in 1917, and sole director in 1923. Despite repeatedly facing financial problems, he managed to secure the Institute's future through donations and private investors; it was not until 1929 that the Prussian government finally agreed to provide the necessary funding.
In terms of its structural organization, the Institute was well ahead of its time: alongside a Radium and X-Ray Department (Ludwig Halberstaedther, Albert Simons), Blumenthal also founded the Departments of History and Hematology (Hans Hirschfeld), the Department of Virology (Ernst M. Fränkel), and a chemical laboratory (Arthur Lasnitzki, Otto Rosenthal). The Institute also had a cooperative partnership with Rhoda Erdmann's Department of Cell and Tissue Engineering. In 1929, the Institute acquired its own Department of Experimental Cancer Research, headed by Esther Eugenie Klee-Rawidowicz (see separate biography). The Institute served as a role model for others both nationally and internationally, particularly due to its ability to provide centralized treatment and care, and the inclusion of an outpatient department. Blumenthal's efforts were aimed at emulating the concept of a cancer treatment center ('centre anticancéreux'). An outspoken supporter of interdisciplinary conferences and decisions, and a proponent of multimodality treatment, he effectively pioneered the very concepts that characterize our current approaches and methods. His ideas were not met with universal approval, however. Walter Stoeckel and Ferdinand Sauerbruch (from the Departments of Gynecology and Surgery), for instance, chose to introduce their own, discipline-specific arrangements for the treatment of cancer patients.
Blumenthal became the Secretary-General of the Central Committee for Cancer Research (Deutsches Zentralkomitee zur Erforschung und Bekämpfung der Krebskrankheit) in 1919, and was the editor of Zeitschrift für Krebsforschung, a renowned journal in the field of cancer research. One of his main areas of interest was the follow-up treatment of cancer patients. Delivered by fully-trained carers, his idea of follow-up treatment also took into consideration the patient's domestic and social situations. Another passion of his was the early detection of cancer, which he supported through the dissemination of easily comprehensible information.
Blumenthal compiled a summary of the state of cancer research at the time, and his vision regarding an appropriate approach to treatment, as part of his book Ergebnisse der experimentellen Krebsforschung und Krebstherapie. The book was published in 1934, when he was already in exile.
Ferdinand Blumenthal came from a well-respected, Jewish family, and his emigration in 1933 turned into an odyssey. Accompanied by his family, he left Berlin in early spring 1933, and initially settled in Switzerland. In September 1933, he was forcibly retired by the Prussian Minister for Science, Arts and Education. Between October 1933 and December 1936, he worked as a visiting professor at Belgrade University's Medical Faculty. During his time there, he attended conferences and held lectures in many European cities.  In 1937, he moved to Vienna, where he was arrested by the Gestapo in March 1938. After his release from three months in prison, he returned to Yugoslavia. He made several attempts to emigrate to England, all of them unsuccessful. In January 1939, he accepted an invitation to come to Tirana, Albania. Due to the threat of an Italian invasion, however, he was forced to leave shortly after his arrival. He found refuge in Estonia (Tallin) in March 1939, and lived through the Soviet occupation, which started in 1940. When the German Wehrmacht reached Estonia in June 1941, the Soviet authorities arranged for Blumenthal, his wife Elly, and two of his daughters, Zerline (born 1908) and Hilde (born 1911), to be transported from Tallin to Kazakhstan. On 5th July 1941, west of Narvas, the train he was travelling on was attacked by the German air force; Ferdinand Blumenthal did not survive the attack; his wife and daughters were never seen again.
Another of Blumenthal’s daughters, Herma Blumenthal (1914-1996), had successfully emigrated to the United States in July 1938. His brother Franz Blumenthal, a dermatologist (see separate biography), left Germany in 1934. Blumenthal's sister, Katharina Buss-Blumenthal (born 1872), was murdered at Auschwitz in August 1942. Another of his brothers, the lawyer Hans Blumenthal (born 1874), was deported to Theresienstadt in November 1942, and died in the ghetto only 11 days after his arrival.
Text by: Harro Jenss, 2015; email: h.jenss(at)gmx.de