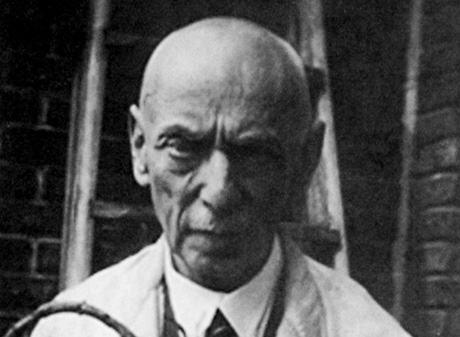 Franz Kramer was born in Breslau in 1878, the son of a liberal Jewish merchant family. In his city of birth Kramer completed his secondary school education and medical studies at the 'Royal Prussian University', where in 1901 he earned his license to practice medicine. In the year to follow he earned his doctorate under Carl Wernicke with a thesis on spinal chord changes in polyneuritis. He then completed an internship with his academic supervisor, whose way of thinking very much influenced the young Kramer. Karl Bonhoeffer was also there when Kramer started work at the hospital in 1902. Bonheffer had already earned his university lecturer qualifications under Wernicke and had taken over the clinic in 1904, while also assisting in the development of prison psychiatry in Breslau in the mean time. Kramer also quickly completed his habilitation under Bonhoeffer, namely in 1907 with his thesis on 'Electric sensibility examinations using capacitor charging'. He became an adjunct professor in that same year.

Kramer's interest in projects in pedagogy and psychiatry was influenced through his contacts with the psychologist Hermann Ebinghaus, a specialist in developmental and child psychology, and with William Stern, in particular concerning questions on intelligence testing, a topic on which he published several articles. To this end he collaborated with institutions promoting educational reform such as the 'Breslau Center for Childcare'. When in 1912Bonhoeffer succeeded Theodor Ziehens at the psychiatric and neurology clinic, he made sure during the appointment negotiations that Kramer would be given a suitable position, namely that of the director of the heavily frequented Polyclinic and 'psychological laboratory. Later he also took over the male ward. Kramer was Bonhoeffer's longest-serving colleague, namely until 1938. Inasmuch as most medical staff were conscripted into military service during World War I – of the 21 physicians in 1913 only six remained in 1917 – and a portion of the hospital beds were appropriated for wounded soldiers requiring intensive care treatment, Bonhoeffer was able to convince the authorities that Kramer's presence was indispensable for maintaining clinic operations.

Kramer continued to pursue his professional passion for child and adolescent psychiatry in a pediatric observation ward (Kinder-Kranken- und Beobachtungsstation (KBS)) established in 1921 and he also served as its director. My colleagues Petra Fuchs and Wolfgang Rose are currently compiling a monograph on the subject of the observation ward. The KBS was sponsored by the 'German Society for the Welfare of Adolescent Psychopaths', of which Kramer was a founding member in 1918, in cooperation with the psychiatric and neurological clinic. The atmosphere at this psychiatric institution for special needs children was characterized by a close and equitable cooperation of the educators and physicians. The model 'healing through education' was developed jointly by Franz Kramer and social educator Ruth von der Leyen and emphasized the children's and adolescents' capacities for self control; today it can be seen as a precursor to modern socio-educational concepts.

In 1921, the adjunct professor Franz Kramer was awarded the 'title of associate professor'. He taught various subjects in the field of child and adolescent psychiatry.

In 1924, at the age of 46, Franz Kramer married 25-year old Luise Scheffels from Breslau and their daughter Gabriele was born one year later. Their son Karl was born in 1928 and Karl Bonhoeffer was chosen as his godfather, a clear indication of the friendship that was much more than simply collegial. Bonhoeffer's trust in him was such that he let Kramer manage the clinic in his absence.

In addition to his duties at the clinic, Kramer ran a private practice in the Budapester Straße, which was also his home address. In accordance with the 'Restoration of the Professional Civil Service' law, Franz Kramer's teaching credentials were revoked in November 1933, and two years later in March of 1935 his employment relationship was also terminated. Kramer was forced to live on the income generated by his private practice. With support from Adolf Mayer who held a position at John Hopkins University in Baltimore he hoped to acquire a chair abroad, particularly in the United States, but his hopes were dashed. His license to practice medicine was revoked in October 1938 and he thereby lost his last source of income. Bonhoeffer and Sauerbruch helped Kramer and his family to reach Utrecht in Holland later that year, where in 1940 he completed the Dutch medical boards. Kramer set himself up as a neurologist in Amsterdam where he practiced until 1947. That same year Kramer turned down a call from the University of Jena, fearing he would not be allowed to return to Amsterdam. Employment in a department in a 'department for psychopaths' in conjunction with compensation from the German Restitution Law were now his sources of income. He continued to publish and remained active in the medical profession in the Dutch town of Den Dolder until 1957. Franz Kramer died on June 29, 1967.

(© Text: Rainer Herrn, Institute of the History of Medicine of the Charité )