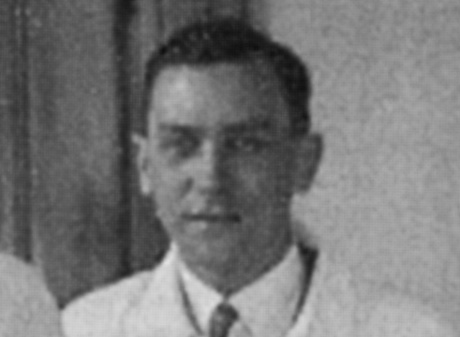 On October 21, 1943, Jean Pollnow, a prisoner in the Mauthausen concentration camp bearing number 34598 was "shot while trying to escape". The man known as the 'French Jew' to his henchmen was only 41 years old; in fact he was born Hans Pollnow on March 7, 1902 in Königsberg.

His father, the respected ophthalmologist Leo Pollnow, served as chairman of the local Königsberg branch of the 'Central Association of German Citizens of the Jewish Faith' in 1908, and in 1911 as chairman of the East Prussian Regional Federation of that same association.

After completing his secondary education in 1920 at the Friedrichs College in Königsberg, Hans Pollnow commenced his philosophy and medical studies, first in Munich and then in Heidelberg, where he attended a seminar presented by Karl Jaspers. As Jaspers remembers it later, it was probably in Heidelberg that this "extremely youthful lad with shining eyes" met Lucie Ney, a woman five years his elder. In 1920, she had already obtained a doctorate in Frankfurt for her thesis in literature studies. They married in 1921 and Lucie Pollnow began her medical studies. The young couple remained in Heidelberg, where Hans Pollnow passed his preliminary medical examination around Easter of 1923.

Hans Pollnow first completed his philosophy studies at the Albertus University in Königsberg. Barely 23-years old in 1925, he had prepared for his doctorate with a dissertation on the topic 'On the History and Logic of Interpreting Facial Expressions' and received his PhD. In the summer of 1926, following his wife, Hans Pollnow passed his state medical boards and subsequently moved to Berlin. On May 1, 1927, his wife assumed a position as a medical apprentice at the Bonhoeffer Psychiatric Polyclinic. Marital problems eventually prompted Hans and Lucie Pollnow to seek a divorce.

Hans Pollnow spent his clinical internship year at Medical Clinic II of the Charité under Friedrich Kraus and at Medical Clinic I under Wilhelm His. Meanwhile, he finished his doctorate on December 10, 1927 and commenced his duties as a voluntary assistant at the psychiatric and neurology clinic. After completing his training in neurology and psychiatry and his medical degree in 1929 on the topic Psychotherapy of the Bronchial Asthma',  Hans Pollnow remained at the Bonhoeffer Clinic. His publications from this period demonstrate his extensive knowledge of contemporary developments in psychiatry and psychotherapy and his ability to apply philosophical approaches to scientific-medical problems.

He was particularly interested in the field of psychopathology in children and adolescents. Beginning around April 1930, Hans Pollnow worked for one year as a ward physician in the pediatric observation ward. His intensive activities in child psychiatry resulted in a joint scientific project with Franz Kramer on "hyperkinetic conditions in childhood". Together, they worked on the study 'Hyperkinetic disease in childhood', which was published in 1931. For the first time they were able to delineate a complex of symptoms as a separate clinical picture in children, at its center hyperactivity, inattentiveness, impulse control disorder. His work that culminated in the concept 'Kramer-Pollnow Syndrome' established his position in the field of psychiatry and even more so today as a 'point of reference for the scientific concept of […] attention deficit disorders (ADHS)'.

Bonhoeffer attempted to keep the young physician in his clinic and applied for a 'vacant supplemental assistant's position' for him. Political conditions made it impossible for Hans Pollnow to remain in his position until April 30, 1933 as had been planned. Charité management complied and did not oppose the orders of the Prussian Minister of Culture and pressure from National Socialist organizations; the institution's Jewish staff members including Pollnow were dismissed, even before the 'Law for the Restoration of the Professional Civil Service' came into effect on March 31, 1933. Without any hesitation he emigrated to France in early May of 1933. In Paris, with Bonhoeffer's recommendation in his pocket Hans Pollnow was able to use his excellent knowledge of French and excellent scientific qualifications to relatively quickly find work in 'in psychiatric and particularly child psychopathological institutions'. As Minkowski's scientific assistant– without a French license to practice medicine he was not allowed to work as a physician – he received a small monthly salary at a 'home for the observation and care of difficult children'. He augmented his income with typing work and giving lectures on the development of child psychology at the institute for science history at the Sorbonne. By 1936/37, Pollnow had published both in the fields of psychiatry and philosophy in the French language - including translations from Jaspers. Before the outbreak of World War II he married Louise, his second wife, and acquired French citizenship.

Pollnow became active in the Jewish Children's Charity, which had been headquartered in Paris since 1933. He was particularly interested in helping Jewish children who had been traumatized by the Kristallnacht and eventually fled to France from Germany and Austria, leaving their parents behind.

Pollnow initially fought with the French Army against the German invasion, but was demobilized following the military defeat of 1940. He declined an offer to go the United States, as he 'did not want to desert France'.

In February 1943, Hans Pollnow was arrested in the city of Pau at the foot of the Pyrenees where he was visiting a friend who was active in the resistance movement. Transiting via several internment camps in France and Germany he subsequently arrived at the Mauthausen concentration camp on August 27, 1943. Hans Pollnow's life ended on October 21 1943, shot by his German guards.