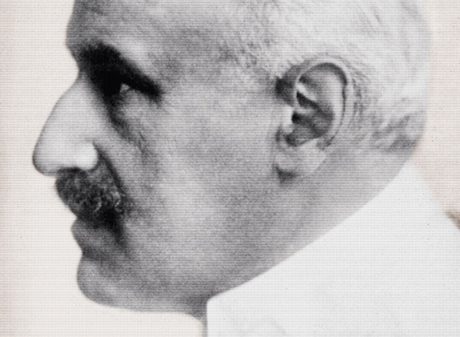 Moritz Borchardt (Berlin 1868-1948, Buenos Aires), completed his specialist training under the instruction of Ernst von Bergmann at the first Surgical University Hospital (Ziegelstraße). From 1905 he was an Associate Professor and from 1906 Chief Consultant of the Surgical Clinic at the Rudolf Virchow Hospital Berlin-Wedding. In 1920 he became Director of the III. Surgical University Clinic at the Moabit Public Hospital in Berlin. Borchardt was a neurosurgical pioneer and was the first physician to successfully operate a cerebellopontine angle tumor. He developed the „Borchardt’sche cutter“ for opening the skull (which has since formed the basis of modern trepanation instruments) and was responsible for the significant advancement of knowledge concerning peripheral nerves. He also developed numerous instruments and devices for limb surgery. Borchardt enjoyed an international reputation as an outstanding surgeon. As a result, he was called in 1922 to Moscow to remove a bullet from Lenin's neck (after Lenin’s 1918 attempted assassination). In 1927 he also treated Reichstag President, Paul Loebe who was suffering from a severe case of appendicitis. In 1933 as a Jew he was formally dismissed from his position. Initially he worked at a private clinic until his teaching license was revoked. He emigrated to Argentina in 1939 as a 71- year-old and died in Buenos Aires on his 80th Birthday.

The Berlin Medical Faculty in 1927 (Drawing: Azarij Wolotzky). Of the 23 professors portrayed in this1933 sketch, eight lost their positions due to either being considered to be „Non-Aryans“ or for being married to „non-Aryans“ or because they were members of the SPD. The following persons are depicted: In the top row the internist Theodor Brugsch (1878-1963) who was dismissed from his position in Halle in 1935 due to the fact that his wife was Jewish (6th from left). In the bottom row Alfred Goldscheider (1858-1935), the internist and Director of the III Medical University Hospital (1st from left). Otto Lubarsch (1860-1933) the Director of the Pathological Institute (5th from left), Martin Hahn (1865-1934), Director of the Hygiene-Institute (10th from left), Alfred Grotjahn (1869-1931), Professor for Social Hygiene und active SPD-health politician (11th from left), Abraham Buschke (1868-1943), Professor of Dermatology, (12th from left), Moritz Borchardt (2nd from right) together with the Toxicologist Louis Lewin (1850-1929) sitting at the far right at the end of the cart. In 1927 they are portrayed as a united force, carrying forward the beacon of scientific light and advancing medical.